Throughout recorded history, and no doubt some time even before that, human society has struggled to make peace with a particular part of the female anatomy. The uterus, (or womb, as it is more popularly known) is perhaps the most mysterious and politically divisive of all organs, inspiring both wonder and fear at its life-giving properties.

This three part blog post takes an historical [if not, hysterical (ahem)] look at the ways in which the womb has long been regarded as the defining part of a ‘female’ body, and how this association has often resulted in a reverse assumption, too- that female humans are uniquely defined by their reproductive role, above all others.

The oldest surviving medical document in the world (dated to 1800 BC), is an Ancient Egyptian guide to female reproductive health. The Kahun Gynaecological Papyrus, as it is known, covers the diagnosis and treatment of thirty-four common ailments disproportionately affecting females.

The womb is thought to be behind all of these problems (including toothache!), through its imagined ability to spontaneously ‘wander’ around the body, wreaking havoc to other internal organs as it pushes against them.

Interestingly, many of the ailments listed correspond to what we might now describe as PMS (Premenstrual Syndrome), or hormone-related symptoms, such as migraine, bloating, abdominal pain, and aching muscles. In fact, the ‘smell of roasting’ is possibly a reference to phantosmia (smelling odours that aren’t really there), a condition that still disproportionately affects females, and can occur as a sign of an impending migraine. 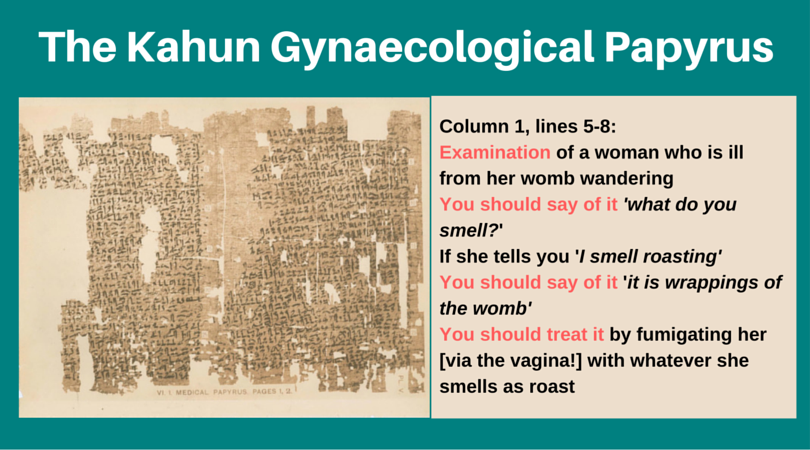 Hippocrates, known as the father of Western medicine, and his followers, were highly influenced by Egyptian thinking, and so perpetuated the notion of the ‘wandering womb’ in Ancient Greece. Hippocratic medicine was based on four bodily fluids, known as ‘humours’; black bile, yellow bile, phlegm and blood. When all four humours are in balance, a person is healthy. When one or more is out of balance, disease and illness will occur.

‘Women’ (i.e. people with a female reproductive system) were considered to be naturally ‘phlegmatic’ (relaxed and peaceful), meaning that they were dominated by water. Since gynaecological disease was most prevalent in older people, including widows and spinsters, Hippocratic writers concluded that regular sexual intercourse was needed to keep the womb moist, and the individual healthy. It was thought that a dry womb would actively wander around the body in search of nourishment and moisture.

As mentioned in a previous post, the supposed health benefits of (hetero) sexual intercourse for girls and women, helped to validate a societal desire to control female sexuality (and status), resulting in harmful practices such as child marriage, and a particular distrust (and oppression) of unmarried or widowed female people, that persists in many cultures to this day.

In Roman times, physicians largely followed the Hippocratic tradition, without questioning the validity of the ‘wandering womb’ theory, although we do know of at least two who did…

Soranus of Ephesus (98-138 A.D.), and Galen of Pergamon (130-210 A.D.) both insisted that the uterus was fixed in place, as Galen made clear, “We must consider as totally preposterous the opinion of those who… make the womb into an animal”. Sadly, this more advanced understanding of the physiology of the womb, was then largely ignored for many centuries.

Note: Although it seems a bit silly now, within its historical context, the ‘wandering womb’ idea was actually a fairly rational way to try to explain the wide range of physical symptoms that disproportionately affect females: 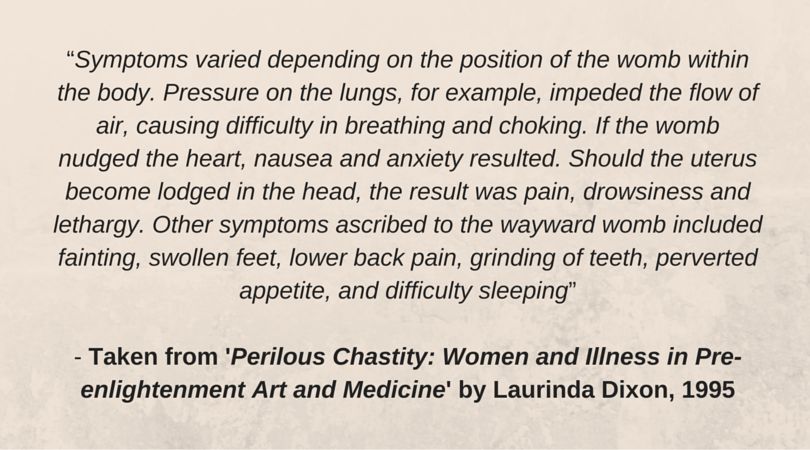 Also, it’s likely that the (still) extremely common problem of uterine prolapse (when pelvic floor muscles and ligaments stretch and weaken, and the womb slips down into, or protrudes out of, the vagina), would have continually reinforced the idea of a ‘mobile’ womb.

We take a look at ‘possessed’ wombs and ‘hysteria’…