This month’s blog tries to unpick a major myth about the female body, and how it affects the way in which clinical research is understood by the public, media, and even other researchers… 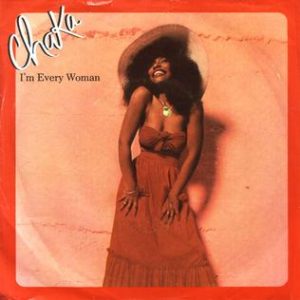 The Myth: that the (menstrual) experiences of a few female patients are somehow reflective of ‘all women’.

Over the past few months, I have been shocked by three separate news stories about menstrual health that have made me realise how easy it is to (sometimes purposefully) misrepresent the findings of clinical research. I suppose this shouldn’t have come as such a surprise, but I was struck by the ease with which high quality work was torn apart by individuals (usually with a political agenda) who had simply jumped to conclusions about the assumed implications for ‘all women’, even though the researchers had made no such universal claims.

In December 2017, respected US psychologist, Dr Robyn Stein DeLuca, visited the UK to promote her new book, ‘The Hormone Myth: How Junk Science, Gender Politics And Lies About PMS Keep Women Down‘ [1]. The main purpose of the book is to ‘confront the pervasive myth that women are at the mercy of their reproductive hormones, and illustrate how the perpetuation of this stereotype harms women‘. Throughout the book, DeLuca uses high quality clinical research to show that ‘the majority of women do not experience major mental or physical symptoms linked to their hormones‘.

Now then. Some readers might think that I would disagree with this position. After all, I’ve spent the past six years (and most of my hard-earned savings) doing research and setting up this website to raise awareness of the fact that changing levels of sex hormones CAN trigger, worsen, or cause various psychological and physical symptoms… However, I completely agree with Dr DeLuca’s evidence-based conclusions- the vast majority of menstruating people do not experience severe hormone-related symptoms. But that does not mean that ‘nobody’ does. That’s why she says ‘majority’ and not ‘all’. And yet, look at how DeLuca’s work was portrayed by right-wing (politically conservative) press [2]; 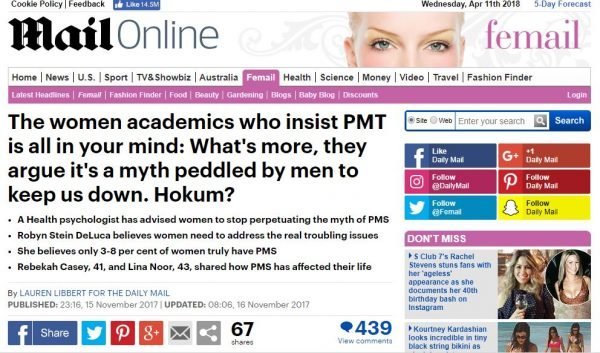 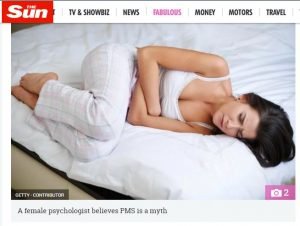 ‘A female psychologist believes PMS is a myth…’ Not so subtle sexism in the Sun newspaper [3](Note- the photo is of someone with period pain, not PMS…)

Notice how Dr DeLuca is pointedly described as a ‘woman academic’ who apparently (although, this is not true) ‘insists that PMT is all in your mind‘ (Note- PMT was renamed PMS in the 1950’s- get with it, Daily Fail!). They are artificially creating controversy, where in reality, there is none. She is actually making a valid point, that PMS only effects a minority of menstruating people, and yet is used to undermine the abilities/ social position of ‘all women’. Anyone who has been on the receiving end of a patronising, ‘is it your time of the month, dear‘ comment will appreciate the truth in her argument…

I particularly dislike the constant references to Dr DeLuca’s gender, as if ‘a woman’ denying the myth of PMS as an ‘all-women’ illness, is somehow betraying her entire sex or gender. Positioning individual PMS sufferer’s stories as opposing ‘evidence’ in the article is also nonsense- they are merely two representatives of the approx. 3-8% who do suffer from PMS… It does nothing to undermine the research findings. These newspapers just want to pitch women against each other, and they think that we won’t notice that what they are doing is pathetically sexist…

2. A review of studies on mood changes and the menstrual cycle

Towards the end of 2017, I was also surprised to see that a highly regarded UK National Health Association (that shall remain nameless!) was publicly criticising a University of Toronto research review paper, claiming that its findings denied ‘the significant mood aspects related to PMS‘.

The paper is called “Mood and the Menstrual Cycle: A Review of Prospective Data Studies” [4]. I was shocked by the criticism because I think the paper is an excellent example of sound research methods, written by an exceptionally well-qualified clinical and academic team; Sarah Romans MB MD, Rose Clarkson MD, Gillian Einstein PhD, Michele Petrovic Bsc, and Donna Stewart MD DPsych.

The main finding of this review of 47 clinical studies, is that the ‘…studies fail to provide clear evidence in support of the existence of a specific premenstrual negative mood syndrome in the general population‘ [4]. What they are saying is that there is not enough evidence to support the widespread cultural myth that ‘all women’ experience negative mood changes in the two weeks before menstruation. So, they are making a similar point to Dr DeLuca (above), that although a minority (approx. 3-8% of menstruating people) may experience significant psychological or physical symptoms just before their periods, the vast majority of menstruating people do not.

However, some influential individuals (and the anonymous health association) were outraged by this paper and took to social media to criticise the authors [5]. They had misinterpreted the findings for the ‘general population’, as equating to ‘all women’, and therefore felt angry on behalf of (the presumably ‘denied’) PMS sufferers. But the researchers at no point claim that the findings are applicable to all menstruating people. In fact, they clearly state that their findings relate to the general menstruating population only, and therefore cannot, and do not, make any claims about the minority of people who do experience severe negative mood changes, premenstrually. 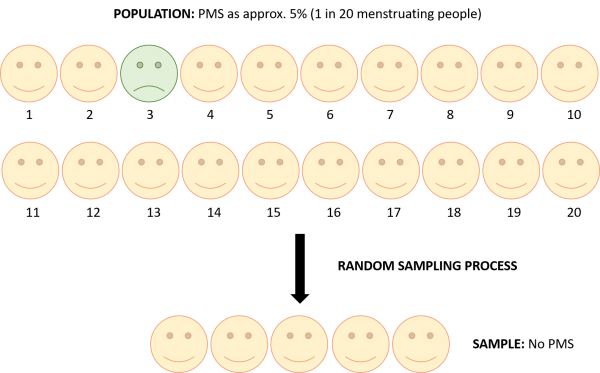 If you think about it, this is common sense. If something affects only 3-8% of a population, and you take a random sample of that whole population, you are unlikely to find a statistically significant relationship between that particular thing and the whole population. This is precisely why PMS researchers have to use symptom-based criteria, in order to select study participants. If we just went out and grabbed a random bunch of people who menstruate, we might not get anyone who actually experiences PMS!

Regular readers will know that I get quite cross at the mention of ‘menstrual leave‘- the idea that ‘all women’ should be able to take time off work ‘each month’, to deal with their periods and/or menstrual cycle-related symptoms. Again, such an opinion may, on the face of things, seem strange considering my quest to raise awareness about the role of the menstrual cycle in ill health. But, as you are probably beginning to realise, I also think that anything that implies ‘all women’ are biologically the same is utter nonsense, and definitely bad news for gender equality.

Despite my best efforts to clearly explain why ‘menstrual leave’ is such a bad idea for the health, wellbeing, and career progression of female employees [6], it still keeps popping up in the news! In 2017, both Italy and India joined a growing list of countries considering the policy in response to clinical research on period pain, endometriosis and PMS. So, it’s time to show how ‘menstrual leave’ is also based on the myth that ‘all women’ are biologically the same (and necessarily at the mercy of their reproductive system)… 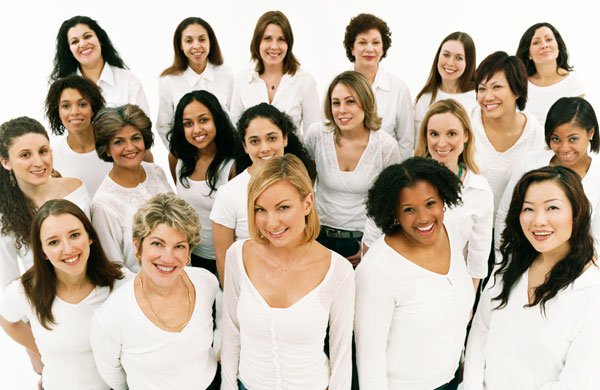 Different women all wearing a white T-shirt… Warning!- This does not make them all the same.

First off, not all women menstruate (think menopause, pregnancy, breast-feeding, hysterectomy, contraceptive medications that stop periods, transgender or intersex women), and the vast majority of people who do menstruate don’t suffer from the kinds of symptoms that would require a day off work, every cycle (plus, in the UK at least, sick leave already covers menstrual health). So, the idea of implementing an additional form of ‘monthly’ sick leave for an entire gender, despite the fact that most people of this gender do not need it, is SEXIST. There, I said it. (Don’t even get me started on how a ‘monthly’ sick day is supposed to account for individual variation and menstrual cycles that normally range from 21 days to 35 days… and beyond!)

Obviously, it would be great if the those people who do experience severe menstrual pain, or other cycle-related symptoms, were able to take time off to visit a doctor or manage their health, without any social stigmatisation or loss of salary/ career progression opportunities. But, that is a different issue. All employees, regardless of gender, who have to take regular sick days off work to manage chronic health conditions are at risk of discrimination. It is this issue that requires new anti-discrimination policies, not a gender-wide benefit that is likely to make employers and colleagues resent ‘all women’ in the workplace. 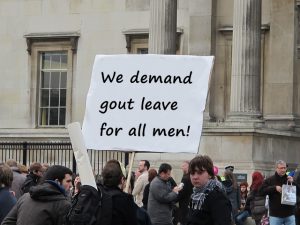 Anyway, I thought I might illustrate the utter silliness of this idea by using a counter example. Gout (a form of inflammatory arthritis characterised by recurrent attacks of painful swollen joints) is a male-prevalent (at least 4:1) chronic health condition, that affects approx 4% of Americans, and 2-3% of the UK population [7]. Gout frequently recurs and typically requires 1-2 weeks off work (5-10 days) each time it flares up [8]. So, gout is only slightly less common than PMS is in the general population, it mainly affects one gender, and can require several days of sick leave throughout the year…

So, why is nobody discussing ‘gout leave for all men’? Well, quite simply, because that would be stupid- men aren’t all the same!

2. Daily Mail Online. (2017) The women academics who insist PMT is all in your mind: What’s more, they argue it’s a myth peddled by men to keep us down. Hokum?. [ONLINE] Available at: http://www.dailymail.co.uk/femail/article-5086569/The-women-academics-insist-PMT-mind.html. [Accessed 11 April 2018].

3. The Sun Online. (2017) EXCUSE ME? PMS is a MYTH that women use as an ‘excuse when they need a break’, female psychologist claims. [ONLINE] Available at: https://www.thesun.co.uk/fabulous/4934342/pms-is-a-myth-that-women-use-as-an-excuse-when-they-need-a-break-female-psychologist-claims/. [Accessed 11 April 2018].

5. For example, Kulkarni, J. (2013) “PMS Is Real and Denying Its Existence Harms Women.” The Conversation. https://theconversation.com/pms-is-real-and-denying-its-existence-harms-women-11714

9. Image adapted from original: ‘No need of Masters, No Desire For Slaves’ Placard on TUC March for the Alternative, London, March 26, 2011 by Danny Birchall.

Categories: No pain, No shame, sameness v difference and The basics.