Trigger warning: This post includes content on suicide; including statistics, methods, and contributing factors. It was also difficult to avoid using gender normative language e.g. ‘men’ and ‘women’ since it is not clear if observed gender-prevalence differences are due to biological sex only, or also caused/ affected by psycho-social factors (based on an individual’s gender identity). More inclusive language is used when possible.

September 10th was world suicide prevention day, so in keeping with this year’s theme, “Connect, communicate, and care”, this post hopes to draw greater attention to this preventable issue. This is also the first in a series of blog posts looking at the relationship between mental health, biological sex or gender, and hormones.

In the UK, depression is approximately twice as common in women as in men, although its most devastating outcome, death by suicide, is far more common in men. This issue is relatively well known, but we still tend to cling to popular myths and misconceptions, rather than respond to what our population data is repeatedly showing us about the underlying causes of suicide, and how best to prevent it. 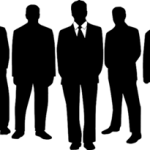 Most people in the UK are probably aware that suicide is a gendered problem, and that far more men take their own lives than women (at an approximate ratio of 3:1). Some will even know that in recent years suicide has become the biggest single killer of men under 45.

But, how many people are aware that more women than men think about, and attempt, suicide?

Research consistently shows that although men are more likely to ‘complete’ suicide, a far greater number of women are contemplating, and attempting it [1] (the estimated ratio of suicide ideation to ‘completion’ is 8:1 in men, and 59:1 in women [2]). Suicide researchers even have a name for this phenomenon: The Gender Paradox [3].

This fact, however, is little known and often dismissed, as if most of these women are merely ‘crying out for attention’, rather than experiencing a comparable level of mental health crisis to those who go on to die through suicide [4]. This is despite research showing that although women are significantly less likely to use a violent method than men, there is no difference in the lethality of their suicidal intent [5]. 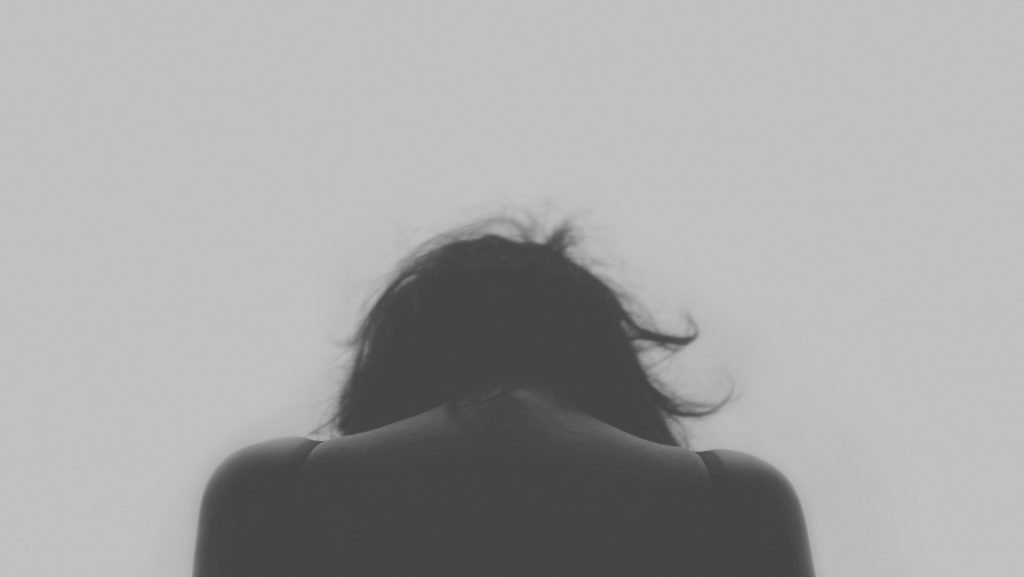 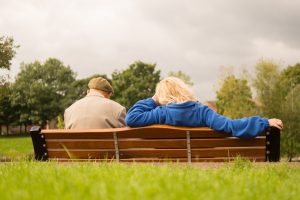 Let’s be clear, the most common factor in why people contemplate and then perhaps attempt/complete suicide, is depression. It is estimated that a (diagnosed or undiagnosed) mental health issue is a factor in 90% of all completed suicides [6], with the vast majority of these being depressive disorders [7].

Linked to depression, are other critical contributing risk factors such as a previous suicide attempt [8], poverty and unemployment [9], lack of access to mental health services [10], emotional distress after a traumatic life event [11], loneliness [12], and low self-esteem [13].

This is the case for both male and female suicidal behaviour. However, the typical reasons why individuals experience these problems, and the methods that they use to cope with them, do vary between men and women, which contributes to the gender difference in suicide completion rates.

For example, men are less likely than women to talk to friends, family, or professionals about their emotional distress, and more likely to become socially isolated, and use alcohol and/or drugs as a coping strategy (see below for more details).

So what might explain the difference in male and female suicide completion rates?

A review of 40 studies [14] found that, on average, 36% of women as opposed to 18% of men had some contact with mental health services within 1 month of their suicide. So, on average, a higher percentage of women accessed professional help in the month before they died.

In response to this identified pattern, many suicide prevention reports (e.g. by the UK government), and mental health campaigns (e.g. CALM), have justifiably focused on reducing the stigma around men talking about, and seeking professional support for, their mental health issues.

However, these figures also reveal that the majority of both female (64%) and male (82%) deaths occurred without the individual seeking professional help, and they only take account of ‘completed’ suicides. It is also not known to what degree contact with mental health care can prevent suicide.

So, it is important to remember that access to mental health support, whilst being a significant gender difference in suicidal behaviour, cannot explain the 3:1 male to female ratio in suicide completion rates, alone. 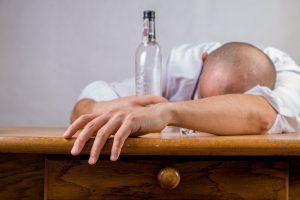 Alcohol is directly implicated in around half of all completed suicides [15]; and those who are alcohol dependent are more likely to take their own lives [16]. In the UK, men are twice as likely as women to have an alcohol problem, and more likely use alcohol to try to cope with emotional distress [17].

In the UK, men tend to choose more lethal methods of suicide, such as hanging, whereas women tend to choose less consistently lethal, methods such as a drugs overdose, or drowning. This suggests that perhaps a critical factor in why more men than women complete suicide is simply down to gendered knowledge of/ access to suicide methods.

A study by the World Health Organisation (WHO) in 2008 [19], found that methods of suicide vary between countries, as well as by gender, and that this difference is driven primarily by availability of means. Similarly, in recent years there has been an increase in the proportion of female suicides from hanging, which may relate to increased restrictions on the availability of toxic prescription drugs [20].

It is understandable, and commendable, that the UK government and relevant campaigning organisations want to reduce the total number of self-inflicted deaths that take place each year. However, it cannot be a good idea to focus the majority of resources and attention on men, only. Especially when women are far more likely than men to experience depression, suicidal thinking, and to attempt suicide (N.B. data on suicide attempts is not currently collected in the UK). 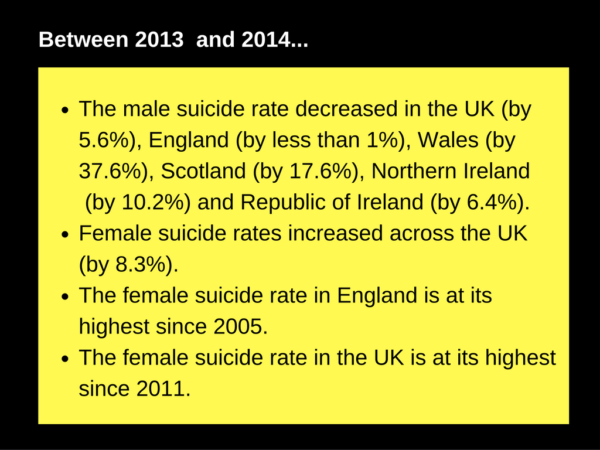 Suicide is known to be a gradual process, (albeit one that may ultimately involve a spur of the moment decision), and yet suicide prevention approaches tend to respond to the final fatal action, only.

In the rush to reduce the most visible and shocking aspect of poor mental health, we risk missing out on discovering more about the underlying causes of depression, suicidal thinking and behaviour.

We will take a look at the relationship between sex, hormones, and depression…

If you are feeling depressed or suicidal, you can find support from the Samaritans:

Samaritans offer confidential support around the clock to anyone that wants to talk through their problems.

Only 1 conversation in 5 is with someone feeling suicidal. Common reasons to call us include: 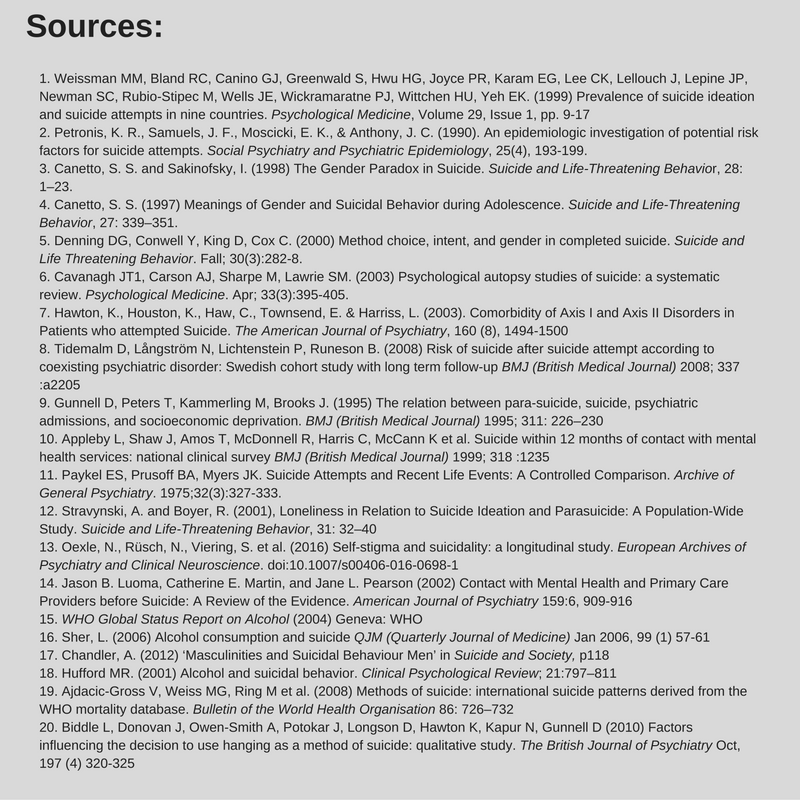