March 8th is International Women’s Day, and 2018 marks 100 years since the UK Parliament passed a law which allowed the first women (property owners over the age of 30), and all men, to vote for the first time… So, it’s time for a suitably political blog post!

Previous blogs have looked at the way in which the female reproductive system (typically the womb– or the menstrual cycle by association), has been used against women in order to justify gender inequality. The first of this 3-part blog describes the likely origins of the myth of the ‘irrational female’ and how it is probably no coincidence that it emerged alongside revolutionary political and medical movements in 17th Century England…

Hysteria- the shift from a ‘wandering’ or ‘suffocated’ womb, to a nervous disorder…

Interestingly, medical depictions of the female body, female-prevalent symptoms, (such as cyclical migraines, asthma, anaemia, or epilepsy), and female-specific experiences (such as menstruation, pregnancy, childbirth, and menopause), typically reflect the attitudes of wider society from the time (and place) at which they are written. So, it is possible to trace shifts in ideas about the ‘proper’ role(s) and rights of women in society by looking into the history of medicine, particularly in relation to female health, and vice-versa. 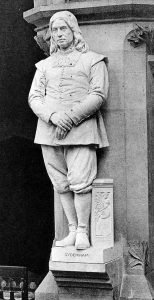 For example, we know that Dr Thomas Sydenham (1634-1689), was the first person to categorise hysteria as a ‘nervous disorder’, rather than a physical problem caused by the womb [1]. He was also one of the first (influential) doctors to admit that it was possible for men to suffer from hysteria, too (hence the need to explain it without reference to the womb).

Whilst in some ways, Sydenham’s position was empowering for women, in that it acknowledged that hysteria wasn’t sex-specific and had little to do with the defining female organ, it also helped to create the myth of the ‘irrational female’ by suggesting that hysteria remained a tangible illness, albeit now caused by ‘excessive emotions’.

In this way, earlier depictions of women as physically, intellectually, morally and spiritually (and therefore socially and politically) inferior to men due to their wombs, simply adapted to fit this new concept. Now women were inferior due to a presumed ‘natural’ and embodied tendency to be ‘excessively emotional’. Sadly, throughout much of history, being ’emotional’, has been synonymous with irrationality, in the sense of being ‘mad’, without logic, or an inability to reason [which is a shame since humans evolved to express emotions as a form of communication, and their suppression can result in violence, illness, and various societal problems].

Revolution and the emerging concept of equal rights…

The history fans among you will know that Sydenham was writing during a time of immense social and political upheaval. The English Civil wars had raged between 1642 – 1651 (Sydenham had fought on the side of the Parliamentarians) [2]. These conflicts were not simply questioning the right of the King to hold absolute power over the laws and taxes of England, but also about the rights of English people to have a say in how they were governed.

During these wars, the Levellers were an influential political movement calling for ‘popular sovereignty’ (the idea that the authority of a state and its government is created and sustained by the consent of its people), extended suffrage (votes for types of men previously not allowed to vote), equality before the law (equal rights for all citizens- although women are not explicitly mentioned), and religious tolerance, all of which were expressed in the manifesto, “Agreement of the People” [3]. 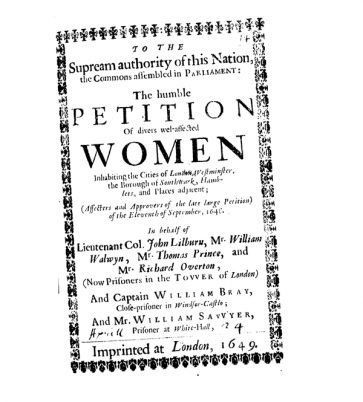 “In 1648, for the first time [in recorded history], a group of [Leveller-supporting] women became involved in direct political action… They mounted large scale public demonstrations and petitions, but were often dragged away by soldiers after trying to thrust petitions into the hands of MPs entering parliament.

Hundreds even tried to storm the gates of parliament. As a result, common women were thrown into prison, mental institutions or workhouses. Middle class women were escorted away by soldiers and told to ‘go back to women’s work’.

In 1649, ten thousand Leveller women signed a second women’s petition to parliament. It is particularly notable because the writers claimed for all women an equal political voice with men.” [4]

Politics, medicine, and the ‘good old cause’…

Curiously enough, before Sydenham became a doctor, he was an unsuccessful political candidate in two elections (during the 8 year period England was without a monarch), only stepping away from this preferred career path after the restoration (when King Charles II reclaimed the throne) [2]. He opposed the monarchy, and wanted England to be ruled by wealthy (exclusively male) landowners [5], harking back to a supposedly ‘golden era’ before the Norman Invasion (1066), when the monarchy and the Roman Catholic church had fewer powers (to increase taxes on the landed gentry)… Of course, he just so happened to come from a wealthy land-owning family! This idealised political model became known as the ‘good old cause‘. Sydenham was such a well-known supporter that when he became a doctor, he was forced to work with poor patients, since most rich patrons did not wish be associated with him after the restoration of the monarchy, in 1660 [5].

‘Hysteria’ had always been a useful medical category to explain otherwise unknown causes of female-prevalent ill health, and it’s adaptable nature meant that virtually any symptom could be classed as hysterical (and used as evidence of the ‘natural’ inferiority of women). By suggesting a nervous cause, Sydenham was simply rationalising a pre-existing societal belief, that could no longer be credibly ascribed to the womb. Sydenham did not knowingly re-define hysteria in order to undermine women’s rationality, and therefore, to dismiss their calls for equal rights and political representation, in keeping with his particular political beliefs. But… It is likely that his political interests did influence his professional life to some extent, and his work likely reflects contemporary societal attitudes towards the role and position of women. 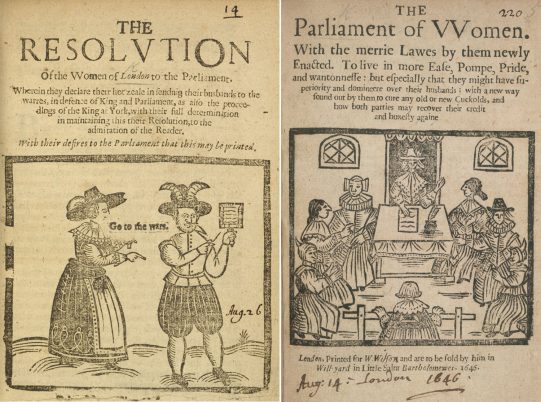 Anti-women’s rights pamphlet, 1646… It positions equal human rights as ‘women wanting to be superior to men’. Effective propaganda that has stuck around for centuries! Source: UK National archives- http://www.nationalarchives.gov.ukhttps://menstrual-matters.com/wp-content/uploads/2016/02/civil-war-source-7.jpg

So, we have already seen how some women were sent to institutions for the mentally ill, simply for taking part in a political demonstration, and daring to ask for equal rights. Time and again, people who speak out against those in power, have been criminalised, derided, patronised, or categorised as ‘insane’. It is not only women who suffer this fate, but as we shall see in the following couple of blog posts, from the 1600’s onward, ‘hysteria’ became an easy insult designed to undermine the rationality and legitimacy of women’s calls for equal rights, through it’s (erroneous) association with the female reproductive system, sexuality, and supposedly ‘female’ mind…