Building on last month’s blog about the way in which PMS is often (wrongly) presented as something affecting ‘all women’, I thought I’d take a stab at busting a couple more gender-bashing menstrual myths. This post sets out two popular myths, the next post explains why people believe them and why this is probably bad news for gender equality… 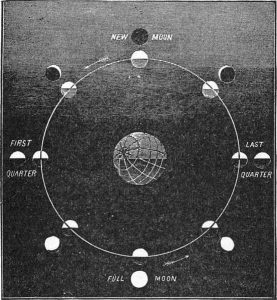 It’s pretty obvious why ancient civilisations decided to name the ‘menstrual’ cycle with reference to the lunar ‘month’ (Greek = men, Latin = mensis)… Since the average menstrual cycle length is close to the length of a lunar cycle (29.5 days). Before people had access to calendars, clocks, or smartphones, it made sense to compare the approximate length of time between menstruation, as being roughly a ‘month’. In fact, this is something that many of us still do…

However, there are people who believe that the moon directly influences the menstrual cycle (either through mystical means, gravity, or light levels) [1]. Some even claim that ‘all women’ once did (and that some still do) menstruate, or ovulate, in synchronisation with the moon’s orbit around the earth. Whilst this is a pretty cool story, it is absolutely NOT TRUE. 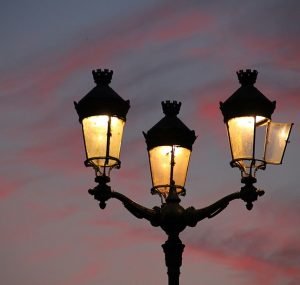 Believers in the myth explain the absolute lack of evidence for it by saying that ‘modern life’ has disrupted the power of the moon over the female reproductive system. They may variously claim that contraceptive medications, oestrogen in the water system, dietary habits, sedentary lifestyles, work stress, interaction with male humans, or electric light have disrupted the ‘natural’ female rhythm [5].

Yet, even historical medical texts, such as the Hippocratic corpus on gynaecology from approx. 4-6 BC [6], or a whole host of 15th-19th Century health manuals, do not mention any (surely highly remarkable?!) lunar effect on the timing of menstruation or ovulation [7]. Plus, people living largely outside, in places without electric light, do not report menstruating in sync with the moon’s phases, or each other, either [8].

This is the commonly held belief that when people who menstruate live in close proximity to one another, they start to synchronise their cycles. The mechanism is generally believed to be due to ‘pheromones‘, or perhaps something that is transmitted ‘socially’ [9]. I must admit that this is something that I used to firmly believe in… until I started looking into it professionally! 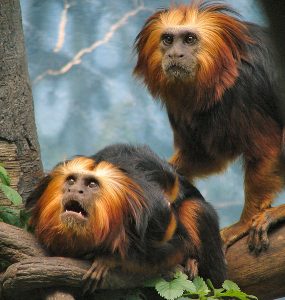 ‘OMG! We’re both on heat! It must be a full moon!’ – Two golden-headed lion tamarins from Mexico City Zoo. (Wiki-commons)

The research ‘evidence’ behind this myth is of poor quality, and is now disproved [9]. The myth was initially inspired by research carried out on the seasonal fertility found in some non-human species; e.g. rats [10], hamsters [11], chimpanzees [12], and Golden-headed lion tamarins [13]. However, subsequent studies failed to find synchronised fertility (i.e. ovulation) in these same species [14-20].

In terms of human research, in 1971, Martha McClintock published the first study on menstrual synchronicity among menstruating students living together in college dormitories. In fact, another name for menstrual synchronisation is ‘the McClintock effect‘ [21]. However, although a few small scale studies in the 1980’s also supported this idea, they were all later discredited for using inappropriate research and/ or analysis methods [9]. Subsequent research has consistently failed to find any sign of synchronicity [9].

In a study specifically designed to address the criticisms and obstacles that other studies had faced, Trevathan, Burleson, and Gregory (1993) tested the Menstrual Synchronicity (MS) theory in a sample of 29 cohabiting lesbian couples, none of whom was having sex with men, and who were older than the college-aged samples recruited in most studies. The investigators argued that, more so than in any other study, this population met the requirements necessary for MS to occur (i.e. the subjects had regular cycles, spent a great deal of intimate time together, and were the least likely to experience possible male ‘‘interference’’ in [pheromone or social] signalling).

Over the course of three menstrual cycles, women kept daily diaries to report changes in menstrual status, sexual activities, stressors, illnesses, and other details about their health and well-being. Although some cycle convergence did occur, cycles were more likely to diverge [22]. The investigators also tested for ovulatory synchrony, which has been implicitly assumed to occur if MS occurs… Using basal body temperature as a biomarker for ovulation, they did not find any evidence of ovulatory synchrony. [9] 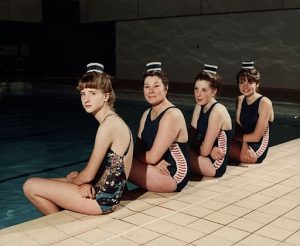 ‘Synchronised’ Swimmers in Washington, UK (1970’s); Tyne & Wear Archives & Museums. (Although it looks as though the one at the front might be an outlier…?)

Most recently, in 2017, large-scale research carried out by period tracking app ‘Clue‘ in partnership with the University of Oxford, found that people’s periods do not synchronise when they live together. The study looked at 360 cohabiting pairs. Analysing three consecutive cycles in each pair, the research found the vast majority – 273 pairs – had a greater difference in period start dates at the end of the study than at the beginning [23].

So, in light of the lack of robust evidence for either of these menstrual myths, it seems strange that they remain relatively common beliefs. The following blog outlines some of the reasons why people might believe in them, and why this is a problem in relation to gender equality.

1. Obviously, there cannot be any proof of any ‘mystical’ mechanism, but we do know that gravity is unlikely to be a factor since the gravitational forces which generate the tides are dependent upon the distance between the earth and the moon, and on the alignment of the moon, earth and sun, and not on the phases of the moon. So a full/ new moon does not produce a specific gravitational effect on earth.

Plus, gravity is a remarkably weak force. Whilst the moon clearly influences oceanic tides, it does not produce tides in smaller bodies of water such as lakes and even some seas, let alone a human. Roger Culver and colleagues have summarised this point elegantly by pointing out that the moon’s gravitational pull was ‘less than that of a wall of a building six inches away’- Culver, R., Rotton, J., and Kelly, I.W. (1988). Moon mechanisms and myths: A critical appraisal of explanations of purported lunar effects on human behavior. Psychol. Rep. 62, 683–710.

As for lunar light, this is known to have an effect on sleep patterns (a full moon tends to disrupt sleep) but, there is no robust evidence of any effect on ovulation/ menstruation.

5.  I have decided not to reference these sources (to avoid naming names), but please feel free to contact me if you would like to know more…

6. (LCL = vols. of the Loeb Classical Library edition) e.g. On the Diseases of Women; On Sterile Women or Barrenness (LCL 10); On the Diseases of Young Women or Girls (LCL 9); On the Nature of the Woman (LCL 10) some ancient texts did assert that the ‘ideal‘ menstrual cycle would result in menstruation occurring ‘on the same days each month‘, but bear in mind that at the time of writing (as now), calendar months were not in sync with the lunar cycle (since it is difficult to calendarise half a day, in order to match the 29.5 day cycle)!

7. I have spent many days trawling through original historical medical texts at both the Wellcome Library, and the British Library. Whilst many texts do refer to the moon, typically as a euphemism for menstruation, I am yet to find one that implies a literal relationship between the moon and ovulation or menstruation.

8. I know this from personal experience of living in rural South Africa for several months, in a village without electricity; my 21-24 day cycle remained unaltered and people menstruated at various times of the month, just as they do everywhere else in the world! More tellingly, Beverly Strassmann investigated menstrual synchrony among Dogon village women (in Mali). The women were outdoors most nights and did not have electrical lighting. She hypothesized that Dogon women would be ideal for detecting a lunar influence on menstrual cycles, but she found no relationship- Strassmann, B I (1997) “The Biology of Menstruation in Homo Sapiens: Total Lifetime Menses, Fecundity, and Nonsynchrony in a Natural-Fertility Population”. Current Anthropology.38(1): 123–129. doi:10.1086/204592

21. Gosline, Anna (December 7, 2007). “Do Women Who Live Together Menstruate Together?”. Scientific American.

Categories: No pain, No shame, sameness v difference, Synchronicity and The basics.