In this blog post, the fourth of five in this series, we consider how menstrual leave policies reflect and contribute to cultures that position women as inferior to men. Here are some shared characteristics of ‘menstrual leave’ countries…

You might imagine that the kind of nation that endorses a menstrual leave policy must be super in touch with the needs of women (in the workplace and beyond). And yet the countries where menstrual leave has been established, or debated at the national level, perform relatively poorly (even compared to their close neighbours) on measures of gender equality [1].

The 2018 WEF report clearly shows how ‘menstrual leave’ countries do not perform well (despite sometimes having far greater economic success than other more equitable countries in their regions):

‘Menstrual Leave’ countries are highlighted- Note how they tend to be in the lower half of their regional ranking, regardless of their relative economic power. Source: WEF Global Gender Gap Report 2018

This at least suggests a relationship between relatively extreme gender inequalities and menstrual leave policies. For example, it is fair to say that more gender equitable countries do not seem to endorse such gender-specific policies, even if they have similar economies (including sweatshop labour conditions): Bangladesh is 60 places above India in the global rankings!

2. Cultural beliefs about the ‘natural’ superiority of men 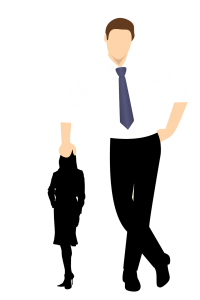 The countries that have endorsed menstrual leave policies are also more likely to have work cultures that naturalise the role of women  as unpaid carers, and men as wage earners [2]. This is despite the fact that a single wage is often not enough to sustain a couple or a family [3], or that for centuries prior to industrialisation, childcare and waged work were typically carried out by both parents [4].

Thus, these countries may also be more likely to have cultures that reinforce the belief that men and women are fundamentally different (i.e the notion of the opposite sex). This incorrect assumption often underpins sexism- the belief that ‘all women’ are somehow biologically inferior to ‘all men’.

In fact, apart from our reproductive biology, most human ‘sex differences’ are actually statistical rather than biological facts; ‘they represent average differences between the sexes, not categorical distinctions’ [5]. So, although the average man is stronger and taller than the average woman, in any large population, many women will be stronger and taller than many men! These sorts of characteristics vary far more between individuals than between the sexes [6].

Likewise, even ‘genetic’ sex differences are small in proportion to all the genetic material we all have in common, and do not automatically result in one group being ‘biologically superior’ to another… For instance, if we suddenly decided that it was the amount of genetic material a person has, that makes them more or less ‘superior’, then our society might start to treat women a little better…

“Biology is a science of exceptions and endless qualifications, and twenty-two of those [chromosomal] pairs are the same as each other (called autosomes), and one of those pairs is not a pair. The pair that is not a pair are the sex chromosomes. I have a Y and an X whereas women have two Xs. Women get one X from each parent… [and] men get their Y only from their fathers. But, though the Y is important for determining maleness, it’s a weedy piece of DNA compared to others, and makes up very little of the total amount of DNA. The X is the second biggest of all the human chromosomes.”

In a nutshell, the fact that male and female humans have slightly different bodies does not justify gender inequalities.

As outlined in the previous blog, ‘motherhood protectionist’ policies that aim to support women, unfortunately usually result in increased discrimination against them [8]. There is evidence to suggest that in menstrual leave countries, ‘all women’ are more likely to be positioned as inherently more expensive or unreliable workers who are likely to require more paid leave (even if not many women actually take it!) [9];

“China’s protective legislation, which came into effect in the early 1990s, focuses on biological differences between men and women. By emphasizing these differences, the law places an added burden on employers who hire women… Many women find that the very laws designed to protect them subjects them to discrimination and disadvantage them in the labor market. Since China began to embrace free markets in the 1980’s, the lay-off of women workers has been one of the greatest problems facing women in China”. [10]

Verification practices can be incredibly humiliating and invasive (probably as a means to deter workers from taking it). The following accounts are taken from a report on sweatshop labour in NIKE factories in Indonesia [11]; 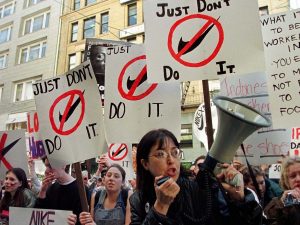 “First, the worker approaches her line chief. If the line chief gives permission, she can approach the foreman. If the foreman gives permission, she can approach the management. After making her way through this management hierarchy, the worker must go to the factory clinic and prove that she is menstruating. She must do this by pulling down her pants and showing blood to the clinic staff.”

“Workers know that simply asking permission to use the bathroom will usually result in their supervisor yelling at them even more. Some insults that workers reported were shouted at them include “bitch”, “cow”, or “pig”… This intimidating humiliation combined with the workers’ apprehension, commonly results in women bleeding through their clothes every month… They wear dark pants and a long blouse so the stain on their clothes is less noticeable when they walk home from the factory.” [11]

Whether or not a person is capable of doing a job (or childcare) is not usually dependent on their genitals, and so policies should not separate workers/carers based solely on this difference.

If a job is too difficult or dangerous for a person to carry out during menstruation, then it is unlikely to be particularly suitable or safe for non-menstruating colleagues, either.

Rather than pretending that the female body is somehow ‘biologically inferior’, it might be better to make sure that working conditions are suitable for all employees, regardless of their sex? As Ann Oakley once said; “the question shouldn’t be how you fit the worker to the work but how you change the work to fit the worker” [12].

In the next and final blog post of this series, we look at some simple workplace interventions that would actually help employees who menstruate.

[1] World Economic Forum (WEF). (2017). The Global Gender Gap Report 2018 Insight Report. Retrieved from https://www.weforum.org/reports/the-global-gender-gap-report-2018 [2] For example, see North, S. (2009). Negotiating What’s ‘Natural’: Persistent Domestic Gender Role Inequality in Japan. Social Science Japan Journal, 12(1), 23–44. https://doi.org/10.1093/ssjj/jyp009 [3] For example, see Macnaughtan, H. (2015). Womenomics for Japan: is the Abe policy for gendered employment viable in an era of precarity? The Asia-Pacific Journal, 13(12:1), 1–23. Retrieved from http://astand.asahi.com/webshinsho/asahipub/aera/sample/2014121900005.html [4] Contrary to popular belief, until the industrial revolution (approx 1760s in Western Europe), childcare was not primarily the responsibility of the mother, and waged work primarily the responsibility of the father. Aside from a minority of very wealthy families, most adults carried out both childcare and waged work. Indeed, many people worked from home and children were looked after by the wider community, too. The idea that women are ‘naturally’ disposed to unpaid childcare is a modern invention. See Waylen, G., Celis, K., Kantola, J., Weldon, S., & Ferguson, L. (2013-03-12). Gender, Work, and the Sexual Division of Labor. In The Oxford Handbook of Gender and Politics. : Oxford University Press. Retrieved 5 Sep. 2019, from https://www.oxfordhandbooks.com/view/10.1093/oxfordhb/9780199751457.001.0001/oxfordhb-9780199751457-e-13 [5] Quote from p 28 of Wharton, A. S. (2005). The Sociology of Gender: An Introduction to Theory and Research. Blackwell Publishing. [6] Birke, L. (2001) The Gender and Science Reader ed. Muriel Lederman and Ingrid Bartsch. New York, Routledge. 306-322 [7] Quote from p 37 of Rutherford, A. (2017). A Brief History of Everyone Who Ever Lived. London [8] The same goes for protectionist policies in general; research has found that the gender pay gap for all women (not just mothers) is higher in countries with policies that aim to protect ‘motherhood’. Mandel, H., & Semyonov, M. (2005). Family policies, wage structures, and gender gaps: Sources of earnings inequality in 20 countries. American Sociological Review. https://doi.org/10.1177/000312240507000604 [9] Menstrual leave policies have been shown to cause employers to avoid hiring or retaining female workers in several countries (e.g. Taiwan, China, Russia, & South Korea).