Is this a monthly problem?

Euphemistic language might spare our blushes in awkward social situations, but it has no place in the diagnostic process.

The menstruation taboo is powerful. It has endured throughout human history, across nearly all cultures, and remains a source of gender discrimination in many parts of the world. Yet, before I experienced its effects first-hand, I did not think it was a still big deal in the UK… Especially not in the context of a medical consultation. But I was wrong. I was as oblivious to its subtle influence over our words, actions, and knowledge as the next person.

In this, the first of three blog posts looking at how the menstruation taboo can undermine the diagnosis of various health issues, I focus on the way in which our choice of language can make all the difference when it comes to understanding the causes of ill health, especially in the case of people who menstruate. 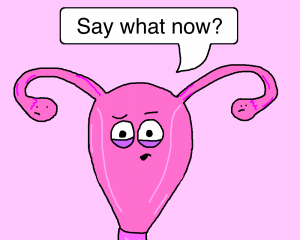 We are all aware of the many colourful euphemisms used to describe menstruation; ranging from the innocuous (Aunt Flo, time of the month, getting the painters and decorators in etc.), to the frankly terrifying (shark week, the curse, the wound that never heals etc.). However, the seemingly universal reluctance to speak plainly about this natural bodily function has some serious consequences.

It is all too easy to assume common understanding when, in fact, a euphemism is, by its very nature, less precise than those carefully avoided ‘taboo’ words.

In my case, a doctor’s choice of words resulted in two avoidable years of debilitating nausea and vomiting. When they euphemistically asked “Is this a monthly problem?” I took the question too literally and replied, “No, it happens several times a month”. In that instant, the doctor and I both dismissed the possibility that the problem could be hormonal in origin.

If they had asked “Are your symptoms affected by your menstrual cycle?” I could have told the doctor that although my symptoms were at their worst before menstruation, they also occurred at other times in my 21 day cycle. This might have been enough to prompt them to suggest keeping a symptom diary– the very thing that eventually revealed a cyclical pattern in my symptoms, two very long years later.

Unfortunately, even the proper language used to describe the hormonal cycle (at least in English) can be imprecise, even to the point of being misleading;

Menstruation/ Menstrual cycle – From the Latin root mensis meaning month- implies a calendar month regularity that just isn’t the reality for many people. Normal cycles actually range from 21-35 days, with the average being 28 days (N.B. contrary to popular belief, 28 days is just the average cycle length, not the ‘norm’).

Pre Menstrual Syndrome (PMS) – The name given to a variety of physical, mental, and behavioural symptoms caused by the hormonal cycle. By definition, symptoms occur post ovulation, during the 12-16 days before menstruation starts, known as the luteal phase of the menstrual cycle.

However, research shows that some people experience ‘PMS’ symptoms around ovulation, as well as just before menstruation. For those with 21 day cycles, like me, ovulation happens just after menstruation ends, potentially making it seem as though symptoms occur throughout the cycle.

So, the menstrual cycle isn’t necessarily monthly, and PMS isn’t necessarily just ‘pre’ menstrual. This means that we are going to have to get much more precise in the way we talk about the hormonal cycle and related health issues.

Also, since it is impossible to accurately recall symptom occurrence (beyond a couple of weeks), and we need to compare at least two cycles in order to establish any hormonal pattern, the use of a symptom diary becomes a critical tool in the diagnostic process.

Only then will it be possible to accurately differentiate between chronic health issue symptoms, and those caused by the hormonal cycle… But, either way, it’s a relief to know that it’s got nothing to do with surfing the crimson wave with your Aunt Flo…