After arguing against the introduction of ‘menstrual leave’ on several recent BBC Radio shows, I was asked to write a journal article on the subject. So, I decided to look into the original YouGov survey dataset to see exactly how the controversial BBC findings (below) came about.

What I discovered is quite shocking… Nothing less than the intentional misuse of data to create misleading sensationalist headlines. 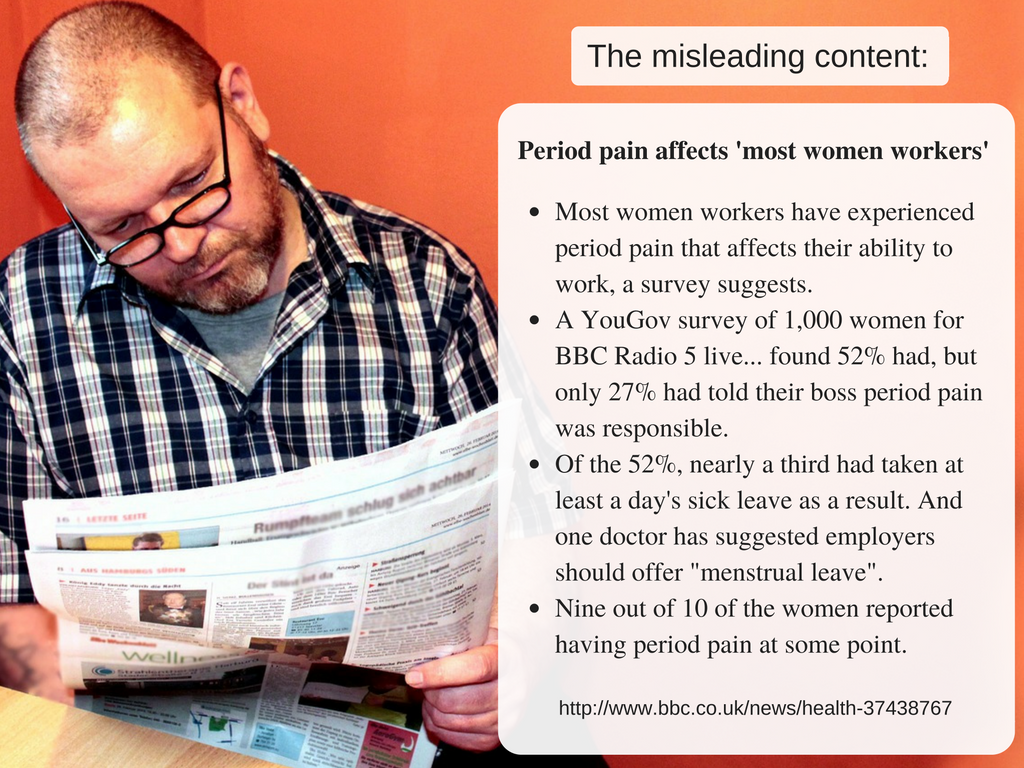 The survey question involved in these claims was extremely poorly worded; “Have you EVER had period pain (e.g. cramps, headaches/ migraines, muscle/joint pains etc.)?”

So, as is consistently found in clinical research, around 90% of survey participants said that they had experienced some degree of period pain at some point in their lives. Since the question states ‘EVER’, even a one-off event produces a positive response, which makes the headline extremely misleading.

Women can have around 450 periods in their lifetime, so it would be much more useful to be able to differentiate between those who experience severe (work-affecting) pain on a regular basis, and those with mild or moderate pain, perhaps with one-off, or relatively rare occurrences of severe pain.

It is also interesting to note that the survey question included other menstrual cycle-related symptoms in its definition of ‘period pain’. This is a bit strange (not to mention misleading) considering that period pain usually refers to uterine cramping, only. I would guess that most respondents assumed the usual meaning, especially with the expected 90% answering ‘yes’, but we have no way of knowing this for sure, and this affects the data associated with claim 2. 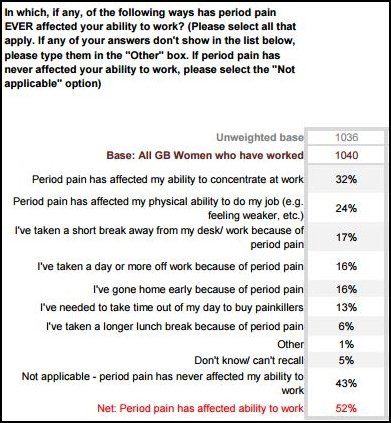 Does 52% really count as ‘most’? I reckon it’s a lot closer to ‘half’! Can we even trust the 52% figure when it turns out that taking a short break away from your desk, taking a slightly longer lunch break, or taking time out to go and buy painkillers all count as significant factors (see table on left)?

We remain unable to judge the severity or regularity of the respondent’s experiences of period pain and we don’t know the length of time respondents may have lapsed in concentration, felt weak, or how early they left work. All that this table really shows is how women try to cope with severe period pain.

I don’t know about you, but I am most impressed by the fact that 43% of working women said that period pain had NEVER affected their ability to work, and that only 16% of women had EVER taken a day off due to period pain.

I’m willing to bet that if we were to ask the same question about headaches or migraines, to both male and female employees, we would see similar percentages across every row of this table, and yet I doubt that anyone would be proposing ‘headache leave’.

Interestingly, over half of the 1000 women participating in this survey no longer have periods, presumably due to natural/ surgical menopause, or the effect of contraceptive medication or devices. Whilst this information (alone) doesn’t invalidate claim 2, it does reveal an intention to mislead the reader.

The language used in these claims suggests that 52% of 1000 women have a current, or ongoing, problem with severe period pain that affects their ability to work. But, we now know that only 47% of respondents still have periods (i.e. are still able to suffer period pain), and that the 52% actually refers to ANY instance of severe period pain, EVER experienced (even if it was just a slightly longer lunch break, once upon a time!).

Interestingly, when we look at the other reasons given to employers (above right), we see that the most popular option is headache/migraine… Yet, due to the wording of the initial survey question that defined ‘period pain’ as including headache/ migraine, we are unable to know if they actually did have a migraine/ headache, or were just using this as an ‘excuse’ to avoid mentioning period pain, which is a taboo subject.

The second most popular reason provided is ‘stomach pains’, another commonly used euphemism for period pain, but also a very common side effect (the hormonal changes that initiate uterine cramping can also cause diarrhoea). So, again we are unable to differentiate between real symptoms, and those simply used as alternative ways to explain period pain to employers.

This wording makes me so cross!

We have already established that the 52% includes such minor criteria as ‘taking a short break away from my desk’, ‘taking time out to buy painkillers’, ‘taking a longer lunch break’, and ‘affected concentration’. So, it is incredibly misleading to suggest that the 16% of women who said that they had EVER (perhaps just once in a whole lifetime) taken a legitimate day of sick leave due to period pain, truly represents a scandalous revelation about women in the workplace.

The fact that only one doctor is proposing ‘menstrual leave’, shows how dodgy these claims really are… Creating an additional form of sick leave, specifically for menstruating women, when only a tiny percentage of individuals are significantly or regularly affected by this issue, is utter nonsense.

This story is pure sensationalism. Something usually found in tabloid journalism, not an independent and well-respected media organisation such as the BBC. The whole article implies that a significant percentage of working women are taking sick leave every month to cope with severe period pain. Whilst a simple check of their own survey data, or any company’s sick leave records, would quickly dispel this myth, the risk is that this misinformation provides ammunition for those already prejudiced against women in the workforce.

Yes, we ought to be able to talk more openly about period pain (and other menstrual cycle-related symptoms), and yes, it should be seen as a legitimate cause of ill health, worthy of taking sick leave. However, there are other ways to raise awareness of these issues, without risking yet another sexist backlash against working women. Data should be used in an accountable and accurate manner, to provide evidence to support greater gender equality, not exaggerated in order to get media coverage at any cost.