This is the last in a series of three blog posts taking an historical look at the ways in which the womb has long been regarded as the defining part of a ‘female’ body, and how this association has often resulted in a reverse assumption, too- that female humans are uniquely defined by their reproductive role, above all others.

So far, we have looked at the ‘wandering womb’, the ‘possessed womb’ and the ‘hysterical womb’… Now we gaze into the depths of the ‘empty womb’ before trying to understand how a person might be able to ‘own’ their womb, once and for all.

In his ‘Short History of Anatomy’ (1957, p 24), medical historian Charles Singer describes how Aristotle (384–322 BC) believed that the material substance of the embryo was contributed entirely by the mother’s womb, in response to the detection of the male ‘seed’. However, the form of the child was controlled by the father, through sexual intercourse; and the soul provided by a divine power upon the child’s first breath outside the womb.

This idea was held for over 2000 years, until the mechanism for mammalian fertilization (i.e. egg and sperm) was discovered by Spallanzani, in 1784. Sadly, since this was also a time when women were controversially making a claim for increased political power, the understanding of the womb as a powerful, active creator of life, came to a rather abrupt end: 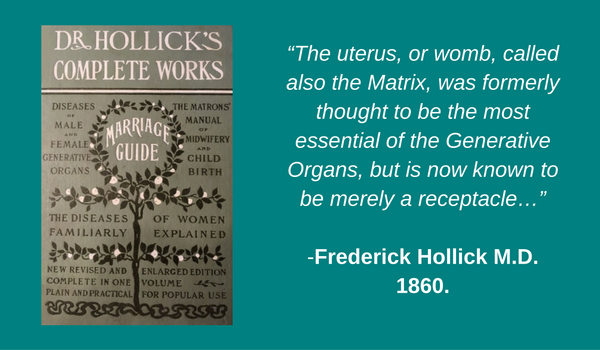 The active, autonomous, potentially dangerous, sexual intercourse-seeking ‘wandering womb’ was replaced with an image of a passive, dormant, ‘empty’ vessel, although still with only one purpose; motherhood. And so, the ‘biological’ rationale used to justify arguments against the female pursuit of independent lives, beyond motherhood, remained.

Interestingly, even modern-day depictions of the womb tend to over-emphasise the emptiness of the ‘uterine cavity’, which is actually more of a slit than a hollow, as highlighted by Germaine Greer in her book ‘The whole woman’ (1999): “Women’s ‘inner space’ implies a negative, an unsoundness, a hollowness, a harbour for otherness. But the term is misleading; there is no more a void inside a woman than there is inside a man. The unpregnant womb is not a space, but closed upon itself.”

So, how well do you know female reproductive anatomy? Click on the image below to find out!

A womb of one’s own

Over the past three blog posts, I have tried to show how depictions of the womb are informed by wider social perceptions about the role and nature of women, and vice versa.

For thousands of years, female human’s life choices and opportunities have been limited, largely for political reasons, but justified on the grounds of ‘biological determinism’ i.e. that they are ‘made’ for reproduction, exclusively, whereas male humans may take on a variety of social roles, independent of their reproductive capacity. Or, as succinctly described by Sherry Ortner (1974), ‘female is to male as nature is to culture’.

So, how do we avoid repeating this historical pattern, and reclaim our wombs (and lives)?

1. Well, maybe we could start by better addressing the medical issues that created the need to imagine a ‘wandering’, ‘possessed’, or ‘hysterical’ womb, in the first place? After all, we do know what these specific female-prevalent health issues are, since they have been well documented over the past three thousand years… 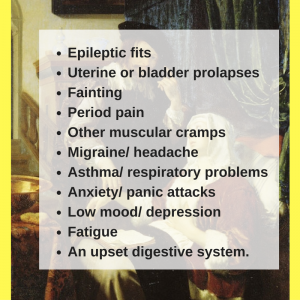 We now know that (aside from uterine or bladder prolapses, caused by postnatal muscle weakness in the pelvic area), all of these health issues can be worsened by the natural changes occurring during the menstrual cycle (even epilepsy!). The womb merely responds to such changes, it isn’t the cause…

2. It might also help to study these ‘women’s health’ issues within endocrinology (hormonal systems and their disorders), rather than assuming that they naturally fit under obstetrics and gynaecology (childbirth and female reproductive diseases/disorders), or splitting them up into different medical specialisms depending on the main symptom experienced, e.g. psychiatry, neurology , or gastroenterology?

3. We could also improve the way in which human anatomy is communicated and taught, to better represent the actual physiology of the womb and other parts of the female genitalia.

Perhaps then, we might be able to consider the womb as we already consider the penis: An organ with the potential to enable human reproduction, but not one that determines parenthood as the necessary, inevitable, or only socially acceptable role for the bearer?