Without expression; silencing the role of the menstrual cycle in ill health- Part 2.

Last week, we focused on how people can be at a loss for words, or prefer to speak in code (usually through euphemisms), when it comes to discussing female reproductive anatomy and health issues. This week, we look at medical language, and ‘danger words’, that help perpetuate the menstruation taboo, even within the clinical context.

In order to reduce the power inequality that cannot help but exist between patient and doctor during consultations, most doctors try to avoid using complicated or technical language to discuss health conditions. However, medical language continues to set the ‘rules of engagement’ in terms of how doctors understand, classify, and connect symptoms to potential causes of ill health.

For example, consider the list of menstrual-cycle related medical terms defined below. Note how they relate almost exclusively to the ‘bleeding’ part of the cycle, without reference to any other part, or function, e.g. ovulation. This narrow range of words (and therefore ‘legitimate’ diagnoses) limits the conceptual (i.e. thinking) space available, because without alternative words, it is hard to consider alternative ideas. 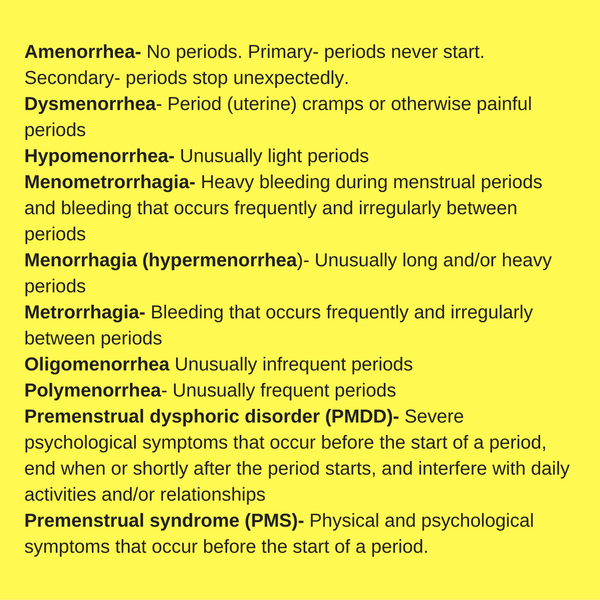 ‘Premenstrual Syndrome’ (aka PMS) is perhaps the best example here of how language can limit understanding, and even misrepresent the medical condition it is supposed to describe. The word ‘premenstrual’ sounds like it refers to the time just before the bleeding part of the menstrual cycle, only.

However, the full medical definition covers the entire luteal phase, from ovulation to menstruation (between 34-76% of any ‘normal-range’ menstrual cycle: 12-16 out of 21-35 days). So, even just in terms of timing, the word ‘premenstrual’ is misleading. This misnomer hides the fact that it is possible, if not fairly common, to experience menstrual cycle-related changes around ovulation, as well as during menstruation, and all the days in-between. (Note- There are additional political issues surrounding the term ‘premenstrual syndrome’).

Additionally, as discussed in a previous post,  the role of the menstrual cycle (or hormonal medications) in causing, or affecting, non-bleeding-related symptoms can be overlooked, in favour of prioritising, then ‘splitting and fitting’ these symptoms into traditional (linguistic and conceptual) categories (e.g. upset stomach fits under gastroenterology, low mood under psychiatry, and migraine under neurology).

It is as though the menstrual (blood) taboo has restricted our vocabulary, preventing us from adequately noticing, naming, and categorising (especially in terms of grouping) menstrual-cycle-related symptoms.

Last week, we touched on the topic of ‘shame’, particularly in relation to words associated with the female reproductive anatomy. Shame is really the key to all taboo subjects. It is what stops people from speaking about them, or even reflecting on them, for fear of being (made to feel) ashamed.

This is not an automatic response to inherently ‘dangerous’ words or concepts, it is something that has to be learnt through social interaction. However, like any animal, we learn to spot and avoid dangerous situations on a subconscious level, and so it can be incredibly difficult to destigmatise, or separate, [taboo] words from their symbolic ‘dangerous’ associations learnt in childhood.

For instance, many people directly equate ‘the menstrual cycle’ with ‘menstruation’, something I notice whenever I first mention my research in public… Nobody is thinking about a complex and healthy physiological process involving chemicals, the brain, the circulatory system, and ovaries; they are all too busy managing their emotional and physical reaction to some imaginary, dirty, scary, menstrual BLOOD!! Arghh!

People will visibly wince, almost as if they’ve been hit, and their faces might display a look of disgust. I calmly continue until I (usually) manage to convince them that I’m not some sort of pervert, or subversive. They tend to calm down and consciously engage pretty quickly. It’s even possible to discuss menstrual blood once the initial fear response has been successfully navigated.

If we’re not busy overreacting to ‘danger’ words, we’re busy not mentioning them at all.

We are the best communicators on earth, and a species (apparently) uniquely capable of self-reflection thanks to our capacity for language. This means that the silence surrounding taboo topics, has to be meaningful. Perhaps it’s the societal equivalent of giving someone ‘the silent treatment’ (a recognised form of emotional abuse)? By prohibiting conversation and intellectual engagement around a specific topic, society shuns those (people and concepts) classified as dangerous?

This approach does make a kind of logical sense, but unfortunately the people who decided what would be taboo for several thousands of years, were not exactly scientists, nor that big on the concept of equal human rights.  Alas, silence isn’t that practical when it comes to busting myths and misconceptions, and so these unhelpful and illogical beliefs can persist.

Silence also promotes misinformation. A recent Eve Appeal survey of 1000 UK women discovered that one in five incorrectly thought that gynaecological cancers were caused by sexual promiscuity. Plus, one quarter of the women would not talk to their GP about gynaecological problems because they did not want to talk about their sexual history.

The menstrual taboo is so interwoven with additional taboos on female sexuality, and anatomy, that people can feel that their bodies are somehow morally corrupt, beyond their control, or shameful. Sadly, this makes a gynaecological examination seem like a potentially humiliating rather than empowering experience, preventing people from accessing life-saving interventions.

So what now? What’s the best way to combat these ‘language’ barriers…? Well, I reckon we just need to continue to talk about these taboos, without embarrassment. The menstruation taboo might be old, but it’s actually pretty weak! Menstrual myths are not backed up by physiological evidence, and by talking openly about menstruation we are challenging others to think about this disconnect between what menstruation is (a healthy and critical process that ensures the continuation of our species) and how we are usually taught to think about it. Just make sure you know the facts first…

We talk. We learn. We change things.