In the UK, most employees are lucky enough to have paid sick leave if they are too unwell to work [1]. This includes menstrual cycle-related symptoms. But, in recent years, a specific type of leave known as ‘menstrual leave’ has been held up as a positive development in women’s health and employment rights.

On the face of it, menstrual leave seems like a good idea. It allows individuals to take additional paid or unpaid leave from work, during menstruation. Certainly, many people who menstruate and have had to leave the comfort of their home to go to work, will admit that, on the odd occasion, they would much rather climb back into bed.

This series of five blog posts reveals that menstrual leave is not nearly as beneficial for women as has been suggested. Underneath this policy lie multiple myths about the female body and menstrual health. Sadly, such assumptions reinforce gender inequality by presenting women as more expensive, or less reliable workers.

The good news is that the kind intentions behind menstrual leave could still be realised through other workplace policies (that also benefit male workers). The final blog of the series covers how to make life easier for employees who experience severe menstrual symptoms, without accidentally implying that ‘all women’ require frequent time off work.

Part 1- Menstrual leave, past and present

Menstrual leave was first briefly implemented in some factories in Communist Russia after the First World War [2]. The Russian policy was only in use for 5 years in the 1920s- women workers asked for it to be stopped because it wasn’t needed and resulted in employers favouring ‘cheaper’ and ‘more reliable’ male staff (sometimes even sacking female workers and replacing them with men) [2].

Japan made menstrual leave a national policy directly after the Second World War (1947). Indonesia and South Korea (previously part of the Japanese Empire) followed suit in the early 1950s [3].

The timing of these developments is no accident. During wartime, larger numbers of women were employed in factories and jobs previously dominated by men. But, when peace finally came, it was felt that returning soldiers had a greater entitlement to paid employment than women [4]. Plus, significant population loss during the wars also raised concerns about national fertility [3].

The fact that strenuous labour can sometimes cause delayed or absent menstruation was used to argue that some jobs were unfit for women, or that women required one or two days off during menstruation, ‘for the sake of national fertility’ [2 & 3]. [Note- resting during menstruation has absolutely NO EFFECT on fertility.]

Menstrual leave was therefore a type of ‘motherhood’ protectionist policy [4]. In several countries, women were also forced to retire upon marriage and were banned from working night shifts or occupations suddenly deemed too dangerous or unhealthy for them (but somehow not for men, or during wartime!) [3]. 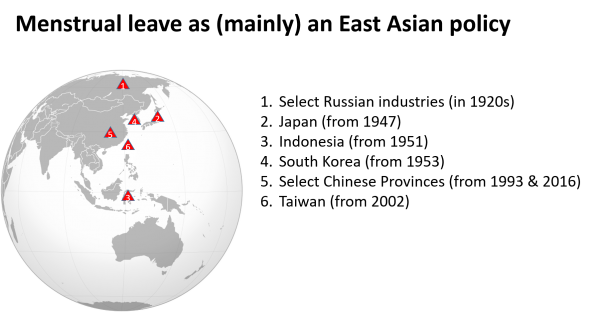 Since the 1970s, East Asian menstrual leave policies have been justified on the grounds of providing support to those experiencing severe period pain or heavy bleeding, as opposed to looking out for national fertility [3]. For example, in 2002, Taiwan passed its Gender Employment Act which brought into effect the right for women experiencing severe menstrual symptoms to apply for one day of leave per month (even though this was already covered by sick leave) [5].

So, for most of its history, menstrual leave has been largely an East Asian phenomenon (see map above). But following a highly-publicised report on the use of Indonesian sweatshop labour by NIKE in 2000, the policy attracted global attention [6].

The report uncovered horrendous working conditions, including evidence of women being subject to “intimidating and humiliating physical examinations” in order to claim menstrual leave [6]. [See the third blog in this series for more details].

NIKE’s subsequent ‘code of conduct’ referred to menstrual leave as a local labour policy that was potentially applicable in some of its international factories [7]. This was misinterpreted by the media as a commitment to providing paid leave for all NIKE employees experiencing painful menstruation and calls were made for other companies to follow its example [8]. In reality, it merely endorsed the existing legal entitlements of some of its East Asian factory workers. 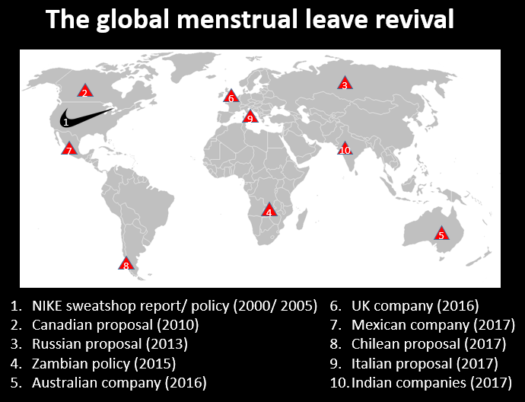 In 2010, a researcher campaigned for menstrual leave in Canada, in an effort to reduce the stigma associated with menstruation [9]. Then, in 2013, a Russian nationalist politician advocated for menstrual leave, expressing how deeply distressed he was for the “fair sex”, “most of whom” suffered from pain “often so intense that it is necessary to call an ambulance” [10]. His proposal did not receive government support, since his argument was recognised as being both patronising and untrue.

[Note- Only a small minority of people who menstruate experience severe pain on a regular basis [11]. This is most likely a health condition that requires medical treatment, not a day in agony at home each month!]

In 2016, two companies created their own versions of menstrual leave policies (see map above). The term was first co-opted by a small social enterprise in the UK in February 2016, although their policy more closely resembles flexible working practice (for male and female employees) [14]. Then an Australian women’s advocacy organisation followed suit [15]. In 2017, ‘menstrual leave’ was also implemented by a public sector organisation in Mexico [16] and two marketing companies in India, sparking a nation-wide debate [17].

Interestingly, one of the Indian company policies was supposed to have the additional benefit of helping to ‘destigmatise menstruation’ [17]. However, in an apparent contradiction, it was made a blanket policy for ‘all women’ employees (regardless of whether they menstruated or not) so as to spare them (and likely also their employers) the embarrassment of having to mention their periods in the office [17].

Historically, then, menstrual leave originated in concerns about finding jobs for returning soldiers and recovering from population loss in post-conflict states but more recently it has been positioned as beneficial for menstrual heath and gender equality in the workplace.

In part 2 of this series, we will expose the significant gap between the good intentions of menstrual leave policies and the actual experiences of menstruating workers…

[1] With the exception of self-employed, temporary, or vulnerable workers e.g. those with “zero hours” contracts. https://www.gov.uk/taking-sick-leave

[4] This was also the case in the UK, mainland Europe and the US after the First and Second World Wars. ‘Protectionist’ policies aim to support women workers but typically result in greater discrimination by making women relatively ‘expensive’ employees compared to men (see blog 3 in this series for more information/ references on this point).

[8]  For example, see how these three articles misinterpret the NIKE policy-

Shipley, D. (2016). Period Leave: Why Companies Should Follow Nike’s Lead and “Just Do It”. Retrieved from https://monthlygift.com/blog/in-the-news/understanding-period-leave-feminist/

Sheffield, H. (2016). Should women have the right to take time off during their periods? The Independent. Retrieved from https://www.independent.co.uk/news/business/news/menstrual-leave-period-pain-womens-rights-a6907261.html

[9]  In 2010, the Toronto Observer reported that Yara Doleh, a researcher and archeologist, proposed an optional menstrual leave in Canada. https://www.cbc.ca/news/health/paid-menstrual-leave-debate-resurfaces-1.2860589

[10]      Gayle, D. (2013). Russian MP accused of sexism for proposing law giving women two paid days off a month when they are on their period. The Mail Online. Retrieved from https://www.dailymail.co.uk/news/article-2382637/Russian-MP-proposes-law-giving-women-period-2-paid-days-work.html

[11] Population studies consistently show that only a minority of menstruating people experience severe cyclical symptoms- typically around 2-8%. See this previous blog to find out what may be behind such symptoms… See also the following blog (2) in this series for more information on the prevalence of menstrual health issues.

[13] Chile – A bill proposing the right to paid leave for women with disabling period pain – specifically, those suffering from dysmenorrhea and endometriosis. https://mhhub.org/hive/policy/menstrual-leave/recT8pla1LMHmAV6K

[14] See Morris, S. (2016, March 2). UK company to introduce ‘period policy’ for female staff. The Guardian. Retrieved from https://www.theguardian.com/lifeandstyle/2016/mar/02/uk-company-introduce-period-policy-female-staff and Owen, L. (2018). Menstruation and humanistic management at work: The development and implementation of a menstrual workplace policy. E-Organisations & People (Journal of the Association for Management Education & Development), 25(4), 23–31. Retrieved from https://www.academia.edu/38038865/Menstruation_and_humanistic_management_at_work_The_development_and_implementation_of_a_menstrual_workplace_policy

[15] A women’s advocacy organization in Australia has been offering paid days off for painful periods, called “period leave” or “menstrual leave,” to its employees since in 2017. https://mhhub.org/hive/policy/menstrual-leave/recqqJxtSlU3I52j4